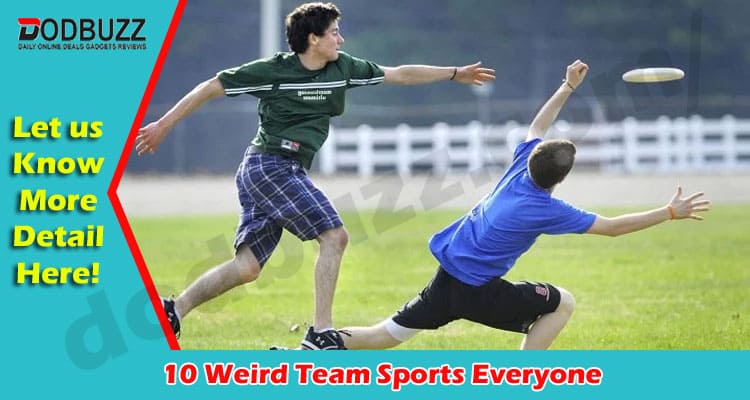 10 Weird Team Sports: Everyone who has played any form of sport in their lives will claim and tell you happily that it has changed their lives for the better. Sports are a way of life. They are feelings and emotions. You can also testify to this. Remember, watching any world cup match, irrespective of which sports world cup it is (be it hockey, cricket, football, rugby, etc.) there are so many people experiencing the same emotions together. Sports are a beautiful way of connecting people.

And that is not just it. They are obviously the best form of physical activity that there could be. There are numerous benefits to playing sports.

If you do not believe the last point, here are some weird team sports that you need to experience in your life.

Also known as the ultimate frisbee. It is played between two teams of seven players each. The goal is to catch the flying frisbees and deliver them to the endzones. This is a no contact sport. Players are not allowed to run with the frisbees.

This is a game where players are supposed to climb on top of a staircase and press the button placed on top. But the twist is that the stairs are very slippery, making it inevitable for them to fall. Players climb these stairs at the same time. So when one falls, all of them fall.

If you remember watching this game in the Harry Potter movies, then you are correct. But the game of muggle quidditch is played with a broom stick between the legs. There is no flying involved, if you were wondering about it.

As the name suggests, it is polo played on bikes. It is a cheaper variant of horse polo. A team of three players tries to outrun each other. Bouts last for 10 to 15 minutes. A mallet is used in the game to hit the hockey ball on the court.

It is a high tolerance game. And that is just it. It is about how much endurance the players have. In this game, players try to keep a ferret in their trousers for as long as they can. And the team that had the longest time, wins.

It is played in teams of three. And the playing field is similar to that of a volleyball court. There is a net, and players are needed to make the ball touch the opponent’s ground. The twist is that use of legs and hands is forbidden. So players use their feet, heads, knees, etc. to score.

It is really a team sport in its true spirit. There are two huge teams of 150 players each. Half the team plays defence and the other half attacks. The goal is to dismantle the opposing team’s pillar.

It is a huge snow ball game where the teams have seven players each. Every player gets 90 snowballs to attack the opposing team. The goal is to defend themselves from any enemy snowball attacks.

Yes, it is a game. The players go to extreme places like; hills, under water, uneven terrain, etc. With their unplugged irons and ironing tables. And there they iron their clothes in competitive spirits. They refer to themselves as “ironists.”

After reading the list, you will most definitely believe me. So try these weird team sports with your friends, and if academic commitments are hindering you from doing so, you can reach out for online assignment help and have a stellar time.

Barack Trump is a sportsperson who has been travelling around the globe trying different local sports. He has been working with Global Assignment Help as a freelancer to assist distressed young people with picking up one or more sports in order to reduce the pressure in their lives. He offers online assignment help to generate some free time for students to participate in sports. In his free time, he enjoys listening to jazz.