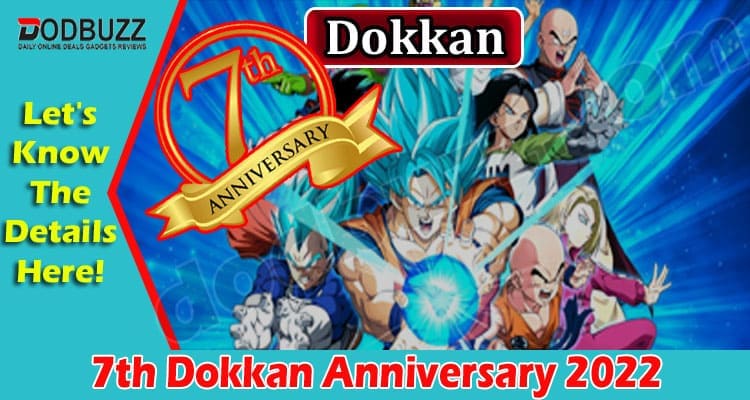 The wait is finally going to be over as the final date of the 7th Dokkan Anniversary comes near! Please read this article to learn more.

All the crazy Dragon Ball game fans would already know about this, but for other fans, the 7th Anniversary of the Dokkan Battle is near, and all the celebration has started!

This Worldwide popular game has taken the fans by storm, and with all the recent reveals about the new game features, everybody is thrilled.

The Dragon Ball Z- Dokkan Battle started the anniversary celebration one week prior. And in this article, we will tell you all about it.

Thus, read this article to find out about the 7th Dokkan Anniversary!

The game is based on the Dragon Ball anime franchise and is available for Android and iOS devices. It has now exceeded 350 million downloads across the globe.

It is a single-player game that received 71/100 Metacritic score. And this is not the only Dragon Ball-based game. Others like the Dragon Ball Xenoverse, Dragon Ball Fighter Z, and more. And other games are available for different platforms.

The Gameplay of the Dokkan Battle Game

Before telling you about the 7th Dokkan Anniversary, you should learn about its Gameplay.

The game has different elements like puzzles, board games, and collectible card games. However, the main game is made similar to a board game. There are fights, traps, and power-ups.

The basic idea follows the anime theme where the protagonist Goku follows his journey to find the wish-granting orbs and training in martial arts.

Players can make transformations, exchange characters, boost, and attack to win the opponent in a fight. And the characters with which a player fights are unlocked from events, missions, or gacha summons.

About the 7th Dokkan Anniversary

And one week before the actual anniversary, the celebration has started on the mobile game via a countdown campaign. Each day players will receive a Dragon Stone, a Commemorative Ticket Summon, and a login bonus.

Players can use these tickets on the 7th Anniversary Ticket Summon scheduled for 29 January 2022.

Some Reveals About the Anniversary

People have already revealed the new anniversary release of the Dokkan Battle game. And if you want spoilers, keep reading.

Blue God Goku and Vegeta, SSJ4 Gogeta will be the new LRs for the 7th Dokkan Anniversary. However, this is anticipated, and things may change in the final release.

With the LRs revealed for this Anniversary, fans have posted their reactions on the Internet. DBZ Dokkan Battle’s revealed LRs have received mixed fan reactions.

However, the Anniversary has been hyped, and the fans are anticipating the new release and live stream scheduled for 30 January 2022.

Are you excited too? Comment below your reaction to the three LRs.

So, the 7th Dokkan Anniversary is almost here, and the LRs are revealed. All the fans are thrilled to get the new DBZ Dokkan Battle release. And we have mentioned everything we know about it in this article.

From here, you can learn more about the Dragon Ball Z: Dokkan Battle, from here! For more queries, reach out in the comments.

Also Read : – Anniversary Trilogy Bad Bunny {Jan} Find How To Get It!