Most Popular December Global Holidays and Their Symbolism 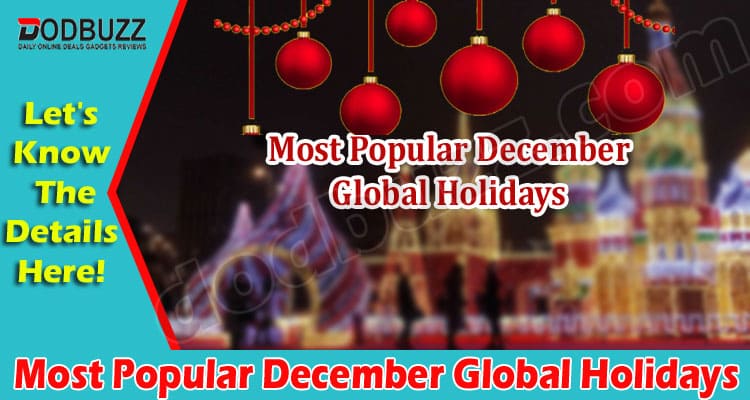 December is the most festive month of the year. This is because the month is marked by a lot of celebrations and events which could be religious, cultural, and even corporate. Most people name the December month as Christmas and New Year’s Eve but there are more December global holidays in that month than just those two.

December is the month with the majority of holidays in the entire calendar. The following are some of the popular December global holidays that are celebrated each year.

This is a religious holiday that is marked from the 28th of November to the 6th of December. The holiday is marked to celebrate the rededication of the second temple of Jerusalem. It is usually celebrated by the Jewish community all over the world, especially in Israel. The holiday is also referred to as Chanukah and is an eight-day celebration where candles are light throughout the night for eight days.

Chanukah also involves the singing of special hymns like Ma’oz Tzur as well as praying a special prayer called Hallel. Other customs that are observed during the Hanukah celebrations are eating of dried food like pancakes and eating of donuts filled with jam. Gifts are also exchanged in this Jewish celebration.

This is a health worldwide holiday that is marked on the 1st of December usually to raise awareness on the HIV/AIDS disease. The idea of this holiday was initiated by James Bunn and Thomas Netter in august 1987 who were working in World Health Organization in the AIDS department.

This popular December global holiday is celebrated in order to raise awareness to the spread of the disease. It brings together all the infected and affected persons to visit children who have been orphaned by the disease, make campaigns on safe sex as well as check on government’s efforts in curbing the disease.

This is a religious holiday celebrated on the 13th of December as a tribute to Lucia Syracuse an Italian saint who died as a martyr. The holiday is celebrated in Scandinavia and Italy and they view the saint as a sigh of light in the darkest time of the year.

To them the saint is usually a symbol of light and hope to the people. Some of the customs performed on that day include processions, concerts, white dress code as well as covering of the heads.

Christmas is among the popular December global holidays marked all over the world on the 25th of December. Christians come together to commemorate the birth of Jesus Christ. This is the most popular holiday in December and it is the day that Christians perceive that the savior of humankind who was sent by God was born.

Christmas among the special December global holidays and is even celebrated by non-Christians. This holiday was chosen by Christians as a reminder and is not the actual date that Jesus Christ was born. Some of the customs that are performed on Christmas day include leaving gifts for Father Christmas or Santa Claus, go for church services as well as vacations.

This is a general holiday celebrated on the 26th of December that is marked in the entire world. There are however divisions on how this holiday came to be. Some believe that this was the day when churches gifted the poor in the community with alms boxes while others see this as the day of appreciating postmen and errand boys for their services. The day has been declared a public holiday in many countries all over the world and is usually marked by organizing sports activities.

This is a holiday just before the end of the year. It is marked worldwide on the 31st of December to celebrate the successful end of the year. People come together to mark the end of that year as well as welcome the New Year. There are several ways in which people celebrate this holiday; the religious people visit their areas of worship, and others go to pubs and social gatherings.