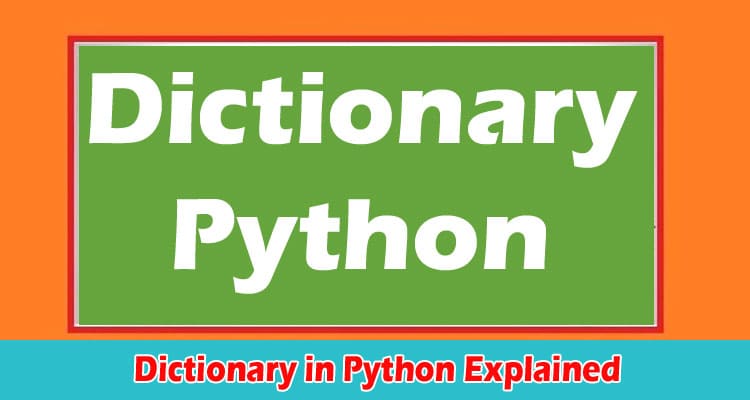 Python has a hybrid data type called a dictionary. It resembles a list that contains a group of objects quite a bunch.

This course will go through every fundamental aspect of Python dictionaries. Students will be taught how to control and retrieve the dictionary’s information. You’ll understand the Python dictionary clearly once you’ve finished this course.

In addition, you will be aware of when to utilize the dictionary data type correctly. And you’ll be able to follow suit.

You should note that lists and dictionaries share certain remarkable characteristics. Some of them are

You should also be aware that lists and dictionaries vary mainly in how the components are accessible. The below are some of the distinctions:

What is Dictionary in Python?

A Python dictionary is nothing but a data structure that enables us to write code very efficiently. This data structure is a hash table in several other programming languages. It is because the keys of the data structure are hashable.

You will find an enormous collection of “key: value” pairs in a Python dictionary. These can be considered simple words in the otherwise traditional dictionary. Here, the values are deemed to be mapped to keys.

What are Dictionaries in Python used for?

With Python dictionaries, you can easily associate a value with a unique key. Further, it enables you to access this value quickly. So you can easily find a particular Python object whenever you are searching for it.

You are also capable of using lists for this scope. However, you should note that they are much slower than dictionaries. The dictionary keys have great speed because they are hashable.

And every immutable object in Python is indeed hashable. Thus, we can pass it to the hash function, which returns the hash value of this object. Further, the values are used to look up a value associated with its unique key.

How to create Dictionaries in Python?

Let us now dive straight into the dictionary creation. There are two primary methods to define a dictionary:

What are the most credible methods of creating Dictionaries in Python?

A few methods can be used efficiently for working with dictionaries. Some of them include the following:

If you wish to delete a “key:value” pair from a dictionary, the “del” statement can be used efficiently. You should note that “del” isn’t any exclusive dictionary method; instead, it is a Python keyword. Thus, you can use it in various situations for deleting any Python object.

This “update ()” method is very useful whenever you want to merge dictionaries. Using an iterable, you can also use this method for adding new “key:value” pairs.

At times you require to delete the last items inserted in a dictionary. And you can do this through the method of “popitem ().” But before Python 3.7, this method randomly removes any element from the dictionary.

And if you wish to remove any specific “key:value” pair and return the value, you can use the “pop ()” method.

What happens when you wish to return all the “key:value” pairs? Well, we need to use the “items ()” method. When it’s used in a dictionary, it returns a “dict_items” object, which is nothing but a list of tuples. This method is useful whenever you need to loop through a dictionary.

This method of “setdefault ()” is often used with “get ().” Both methods perform a more or less similar task. And whenever you suspect a non-existing key in the dictionary, this method can be used to return a default value.

Is it worthwhile learning Python?

Standing in the year 2022, it is worthwhile to learn Python. This is because some of the trending fields in the tech world heavily rely on programmers with Python skills. Artificial intelligence and machine learning depend entirely upon Python.

It is no secret that Python is the most in-demand skill to learn in 2022. From data science to web development, Python has a remarkable scope in the future. And this is a great opportunity for all existing programmers and enthusiasts to have a bright future.

This quick and comprehensive guide has covered all the basic properties of Python dictionaries. We hope you learned how to access and manipulate dictionary data. And by now, you will know that lists and dictionaries are two types of Python that are used very frequently. Besides, there are many similarities and differences in how the elements of dictionaries and lists are accessed.