Dmart Scam (Aug 2021) Stay Alert And Beware Of This Scam 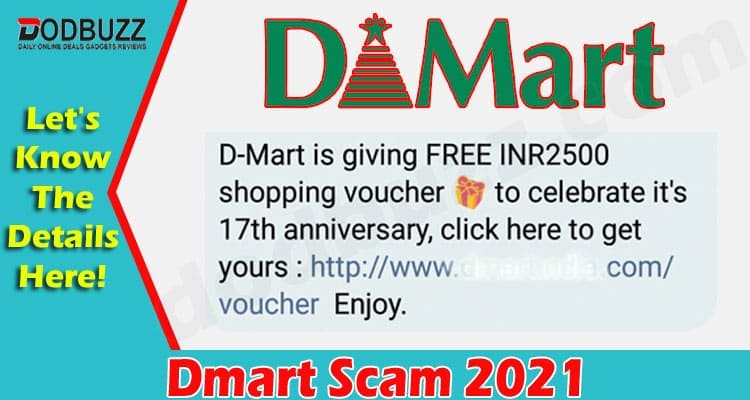 Cyber scams are getting quite common these days, and the recent one doing round-ups in India is the DMart scam link. DMart is the famous grocery store and supermarket and on its fake 20th Anniversary, scammed link messages are being forwarded to customers and claiming to offer gifts.

According to sources and cybersecurity experts, the DMart 20th Anniversary Gift Link is circulating online, and it is a scam. Cybercriminals are targeting the customers of the store to steal their personal details and data. So, stay alert of Dmart Scam to prevent falling prey to cybercriminals.

What is Dmart’s 20th Anniversary Scam?

The Dmart 20th Anniversary Scam is the new cyber scam where fake WhatsApp messages are circulated amongst customers in India. The messages comprise a suspicious link where recipients need to click to claim the free gifts and rewards.

The scam messages are being sent to random users. The scam message reads, “More than 3K rewards and prizes are waiting for you here. Click now for computers, iPhone, and more.” There are more than 500 money prizes to claim from $10 to $7000. Recipients are urged to click on the given link to claim the prizes. The Dmart Scam message allows each user to try up to three times.

Besides, a timer is set to create exigency amongst the customers.

What Recipients Have to Do to Claim their Prizes?

The scammers are sending fake scam messages to random customers of DMart. The recipients receive a text message containing a suspicious link. Then, they have to click on the link to open the gift box and claim their money prizes.

They have to complete an online survey to claim their gift box as they click on the link. If they win, they have to share their personal details and wallet details. Finally, they need to share the messages in the WhatsApp group.

According to cyber experts, it is a fake and scam and must be avoided. Online fraudsters attempt to steal the users’ confidential data by alluring them with free gifts and prize money.

Based on these data, fraudsters are trying new methods to scam people and steal their confidential data. So, avoid such scam messages claiming to offer gift boxes and prize money.

Cybercriminals are finding out new methods to do scams with innocent online consumers. The new method to trick the customers is online scam messages with suspicious links.

Consumers are urged not to click on any suspicious link that comes with the Dmart Scam messages. There is no such confirmation from the company about the 20th Anniversary gift boxes, which is considered a scam.

Have you got the scam text message, and what measures have you taken? Then, kindly share it with others in the comment box. Also, learn here how to stay protected from the online scams.