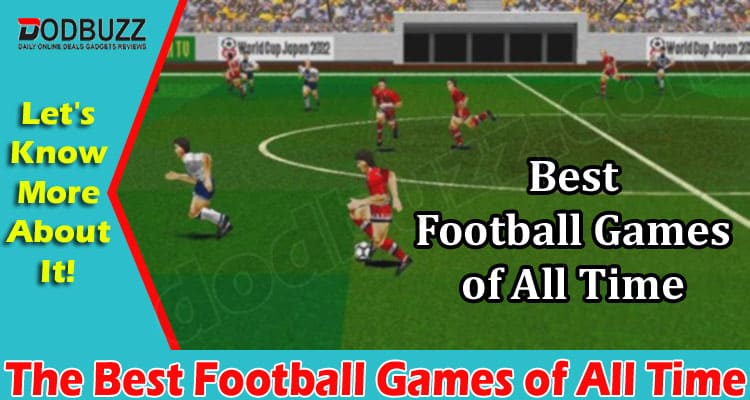 Football Games: The new NFL season is just two weeks away and based on the upheaval of the offseason, the 2022 NFL season promises to be one of the most enthralling yet.

At this time of year, there are many traditions and preambles to the season, from checking the opening weekend’s NFL lines to making your first fantasy football selections, but for gamers, there is also the huge anticipation associated with the launch of the new Madden title. First launched in 1988, EA’s NFL game has established dominance over all of its competitors. But there is a long and rich history of various football-based video games. Here are some of the best.

This timeless game debuted in the 1980s arcades before moving to the Nintendo Entertainment System. It was a very simple version of football, where you tried to advance the ball by running or passing up the field, with very few play options. Older gamers will remember the crowd noise that sounded like static from an old TV, as well as the rectangular formation your team’s blockers would take up on a kick return, but it was an important stage in the development of football games and is fondly remembered.

This was NBA Jam’s pro football counterpart from the 1990s, which makes sense given that Midway created both games. As another game that was quite popular in arcades before being released on home systems, it featured players moving at full speed while flinging footballs with smoke spraying out. The game also made some changes to the NFL regulations. For instance, instead of needing to advance the ball 10 yards, you had to do it 30 yards. It was also seven-on-seven, an option that EA had originally wanted.

A legendary title in NFL games, Tecmo Bowl also began in arcades but gained the most devotion from fans during its time on the NES. Tecmo was a little more sophisticated than football video games had been up to that point, but it was still quite simple. Two run plays or two pass plays were your options. But perhaps the most memorable aspect of the game, besides the great music, was that if you played as the Chicago Bears or Los Angeles Raiders, you were unstoppable, as Walter Payton and Bo Jackson were more or less unplayable.

Sony also used to make NFL games, although now, the company is best known among sports gaming fans for its MLB The Show. Nevertheless, Sony’s GameDay ’98 stood out among the first NFL games as it featured three-dimensional players. It also debuted the Total Control Passing feature that enabled you to steer your receivers to a certain location or underthrow to prevent a turnover.

With a new Madden game coming out every year, there are plenty of titles to choose from, but for many football video game fans, the 2004 edition is the best. Quarterback Michael Vick was the cover star and was also a dominant presence in the game itself, boasting a strong arm and the speed of wide receivers. It didn’t make for ultra-realistic gameplay, but the fun quotient was high.

From an era when the 2K series was Madden’s main adversary, this franchise was often rated more highly among critics and video game fans. Sega released NFL 2K5 in July 2004 for a price of $19.99, which represented a direct challenge to EA’s more expensive offering. This title also featured a major licensing deal with ESPN, as well as a strong Franchise mode that let users take charge of their preferred team and guide it through several seasons. Sadly for 2K fans, this was the last game produced in the series, as EA struck an exclusive deal with the NFL, but it was arguably Sony’s best effort.

College football hasn’t had the same level of effort devoted to it as the NFL, but for a while, EA ran a parallel NCAA series, and the 2013 version, its final entry, was the best. This edition finally distinguished itself and stood in its own right after multiple seasons in which it appeared to exist in Madden’s shadow. Virtual players moved more like their actual counterparts, thus, enhancing the gameplay. And there was a popular Dynasty Mode, which allowed gamers to recruit players to create their own NCAA empire. Crucially, the game allowed players to run college offenses that were not available in Madden.