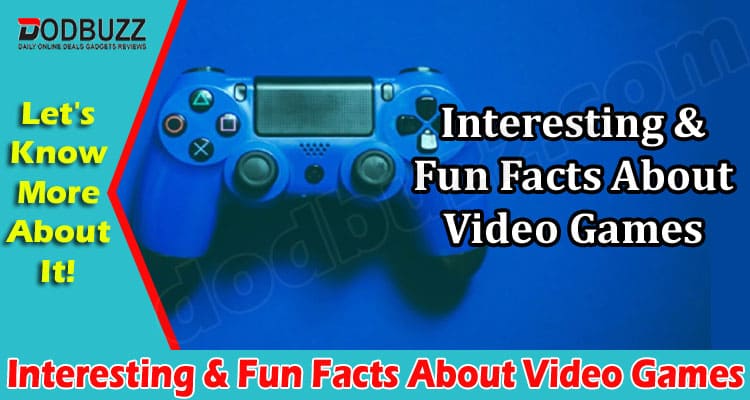 Interesting & Fun Facts About Video Games: Video games are forever! Whether you’re an adult or a student, we’re sure you’ve come across playing games at least once in your lifetime. What started as a way to kill some time has become a massive industry today. Video games are no longer any random games without any motive.

Today, these games come with dedicated characters and their storyline. Besides, if you’re already a video game geek, chances are you already have a comprehensive knowledge of the different games you’ve played.

But what if we told you there are things you don’t know about your favorite game?

Yes, during its development phase, every game undergoes a lot of modifications, later made into stories that most gamers had never heard of. So continue reading as we present you with exciting and fun facts you wouldn’t know, even after completing every side quest a dozen times.

It’s no surprise that the names of many Koopalings from the Super Mario video games directly refer to established singers in the real world. For instance, most individuals can easily recognize the connections between names like Lemmy, Ludwig, and Iggy.

There’s also another character Reznor (the fire-breathing triceratops), the not so liked nemesis in the Super Mario World. Interestingly, that character also has a unique reference for its name. It’s named after Trent Reznor, a member of the Nine Inch Nails, who also happens to be the composer of Quake music.

Following World War II, South Korea restricted Japanese cultural imports, a prohibition that remained effective till 2004. While the restriction saw a ban of many prominent offerings by Japan, South Korean’s also missed out on the new advancements that the Japanese had to offer, especially in the gaming sector.

Interestingly, that does not imply that South Korean players were not introduced to Mario. Interestingly, Nintendo’s merchandise was supplied in South Korea through Hyundai Electronics. The Comboy 64 and Super Comboy succeeded the Hyundai Comboy, making it NES’s predecessor in the following years.

Batman: Arkham Asylum happens to be a gaming masterpiece! It is one of those few games that continue to introduce us to new features, hidden side quests, and storylines, even after its launch over a decade ago. Well, here’s an interesting fact that many hardcore gamers didn’t know about!

During its early phases of development, the game was introduced as a rhythmic action game. Following the development plan, the second prototype was centered on 2D combat and featured colorful circles slamming into one another whenever foes were engaged. However, after the third attempt, the developers were able to build the ultimate fighting system for this game.

There happen to be some music, featured noises, or callout phrases that become a trademark for the game. For instance, Fallout 3’s gratifying “ding,” a sound that it makes when the Fat Man bomb is detonated.

However, the sound many users enjoy and have a bittersweet memory of isn’t that of a nuke. Instead, the voice is adapted from a cafeteria bell from Bethesda Softworks. Besides, the Fat Man in the game was inspired by the Davy Crockett Tactical Nuclear Recoilless Rifle nicknamed ‘M-388,’ which also happens to be an actual nuclear launcher created in the 1950s.

After the grand success of the gaming franchise that later turned into a movie, there are hardly any people who don’t know of Lara Croft! However, what if we told you that the leading tomboy from the game was never supposed to be called Lara Craft in the first place?

Toby Gard, a Core Design animator, had the idea to create an interactive film featuring a man searching through Egyptian pyramids for hidden wealth. However, given its relative significance to Indiana Jones, the character was swiftly replaced by Laura Cruz, a South American lady. Lastly, since Core needed a name familiar to Britons, the staff members looked through a phone book and chose the name “Croft,” making it Lara Croft!

#6 Queen of Persia Was Once A Product In Making

Ubisoft’s Assassin’s Creed series has been a viral and long-running game for decades. The game has evolved dramatically, bringing an immersive gaming experience to its players across different digital formats. Yet, interestingly, there never was any such plan to introduce the game.

Originally intended to be a spinoff for Prince of Persia, the now “Assassin’s Creed” video game revolved around a female assassin charged with guarding a prince in Jerusalem. The game was titled Prince of Persia: Assassins. However, Ubisoft rejected the concept after about a year of development because it wasn’t focused enough on the prince. The game was later changed to become Assassin’s Creed!

This Is The Era Of Gamers!

As of 2022, over 3 billion gamers spread around the globe. The gaming industry is no longer limited to just a pastime. Today we have professional gamers making a serious career out of video games.

Besides, if you have such gamers in your life, you might need some serious suggestions for buying them presents on special occasions. Well, we have a solution for you! So the next time you face such a situation, visit Coingate and purchase gaming gift cards for your loved ones. All the best!