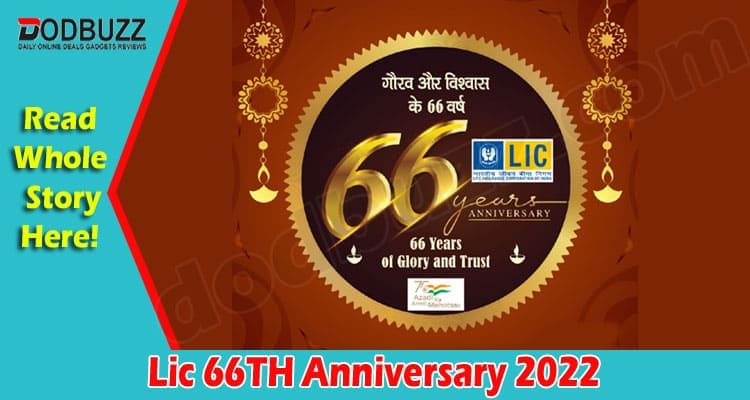 Today, in the Lic 66TH Anniversary post, we will look back at its establishment history, the organization’s current stats, and more.

Do you know when LIC celebrates its foundation day every year? Have you owned any plans from LIC? Insurance from LIC is widespread in Indian houses.

It is the most trusted organization and owned by the government of India that aims to give insurance to all people at an affordable cost. While celebrating its foundation day, let us know the history and current stats through the Lic 66TH Anniversary post.

When does LIC celebrate its anniversary?

LIC celebrates its anniversary every year on September 1 as it was founded on September 1, 1956 (66 years ago). The headquarters is in Mumbai, and it has eight zonal offices in different parts of India, namely Hyderabad, Chennai, Kolkata, Patna, Mumbai, Bhopal, Delhi, and Kanpur. Moreover, it has 113 divisional offices, 2048 branch offices, and 74 customer zones, and as per 2020 stats, it has more than 110,000.

The leading insurance company celebrated its Golden Jubilee foundation in 2006.

When is Lic 66TH Anniversary?

LIC is celebrating its 66th establishment anniversary on September 1, 2022, Thursday, and is entering 67 years of its foundation this year.

The organization is recognized internationally and shows its presence in 14 different countries of the world. In addition to life insurance, the organization ventured into other services with the help of its associates and subsidiaries. Some popular examples are LIC Mutual Funds, LIC Housing Finance ltd, LIC International Ltd, LIC pension Funds Ltd, etc. The LIC also own various awards and accolades for its exceptional service.

On Lic 66TH Anniversary, let us look back on its history and how it formed.

Sixty-six years back, LIC was formed when parliament passed the LIC Act, in which 245 insurance companies merged and created the Life Insurance Corporation of India. Initially, the government provided the capital of 5 crores and owned it 100 per cent.

LIC’s motto is your wellbeing is our responsibility and is taken originally from Bhagavat Gita’s sloka “Yogakshemam Vahamyaham.”

Key people in the company include M R Kumar, who is a chairperson, while B. C. Patnaik is a Managing Director of Lic.

Some current stats of the organization:

As Lic 66TH Anniversary is celebrated this year, let us know some of the statistics of the organization:

LIC is celebrating its foundation day today. It is the leading and most trusted insurance company. In the Fortune Global 500 company list, LIC stands 98th position. To know more about LIC, visit here

Do you hold a life insurance plan? Please comment if you knew about Lic 66TH Anniversary.