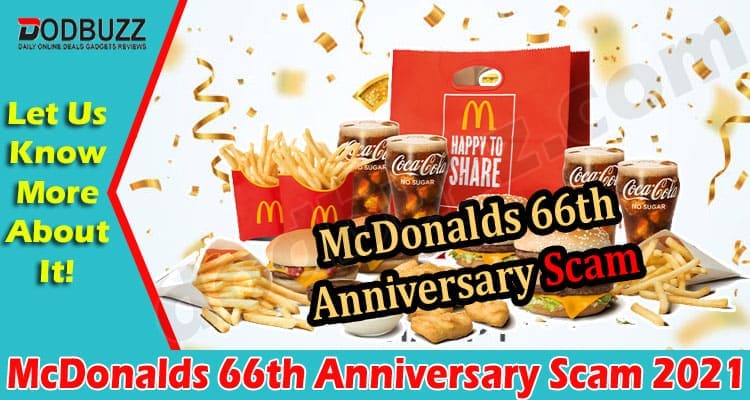 Read a comprehensive review on McDonalds 66th Anniversary Scam that promises user gifts just by clicking on a link.

McDonald’s 66th Anniversary giveaway posts on Facebook are scams. Scammers had published the post on Social media and shared text messages. The main aim of scammers was to let the people click on the link mentioned in the McDonald’s 66th Anniversary Carnival post. The users from the Philippines, Australia, Canada, and the United States who had tried getting the gifts reported that the website prompted them to fill a survey.

What is McDonald’s 66th Anniversary Scam?

Users who had clicked the link were informed that the website promises MCDonald’s coupon of $700 as a gift. The message was forwarded many times by Facebook users to their friends and family. Soon it was on trend. The scammer picked up the trend, and soon, similar posts (more than 2) came up on Facebook.

The noticeable aspect of the post was that it did not redirect the user to MCDonald’s official website. Instead, one of the posts redirects the users to msq69ar2.keqingsong com, another post on McDonalds 66th Anniversary Scam redirects the user to ms11h3c8t.k16fq3x.shop com and the third post redirect Facebook users to msp73fvb.ttzcp com.cn and so on.

By now, you may have got the idea that McDonald’s 66th Anniversary IS A SCAM.

All three websites running McDonalds 66th Anniversary Scam are going to expire in 2022. Considering the terrible trust scores, all three websites are illegitimate. By giving the survey, you allow ample time for such websites to upload your information to their domain as the malicious website scripts run in the background.

You will receive a text message initially that contains the website link. Once you are on the website, it will prompt you to SHARE the news with at least FIVE groups (or) TWENTY friends. This was the news which had spread from a text message to a social media group.

Such messages will offer:

How to avoid being scammed:

The McDonald’s company was started on 15/May/1940. So, their anniversary is already over. Moreover, it is 81 YEARS after its establishment. Hence, McDonalds 66th Anniversary Scam messages are illegitimate. There was no announcement made on McDonald’s official website about 66th-anniversary gifts for EVERYONE. It is unlikely that McDonald will offer gifts to ALL.

Would you like to know about current offers from McDonald ? Do let us know about your experience with McDonald’s gift cards.