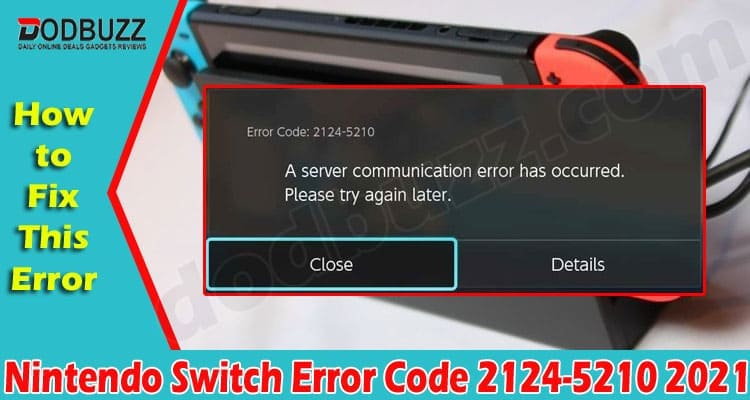 The users are outraged as Nintendo’s servers are down due to some error. Everyone trying to connect to Nintendo Switch is getting an error code- 2124-5210. The Error occurred approximately at 10:00 am on 7th December 2021.

The users, mainly in the United States, the United Kingdom, and Canada, are tweeting their disappointment on Nintendo Switch Error Code 2124-5210, which has made their accounts inaccessible. Before getting into the issue of Error, we would briefly learn about Nintendo Switch and how it works.

What is Nintendo Switch?

Nintendo Switch is a video game device in the form of a tablet that can be used as a portable device for playing games. Multi-national company Nintendo developed it. Games like The Legend of Zelda: Breath of the Wild, Mario Kart 8 Deluxe, Super Mario odyssey, etc., have contributed hugely to the game’s popularity. By the Nintendo Switch Error Code 2124-5210, the users find it unable to access these games.

The software in Nintendo Switch works on a custom-made operating system called Horizon. A single-switch console is required to support eight profiles, which can be tied to a Nintendo user ID. Nintendo also awards $20,000 to the first person to identify any pirate, hacker, or phishing attempt on the platform.

In 2018, a hack occurred where hackers entered users’ accounts and loaded custom offensive pictures on the avatars. A hacker also posted a video on YouTube depicting how easy it is for the hackers to enter Nintendo.

The Error looks like a temporary technical glitch or a bug that has transmuted the system. No official statement has come from the developers. For now, users are stuck with no coherent argument to understand why their accounts have suddenly been made inaccessible. Some are calling it a common bug that would be weeded out shortly. Some, however, are concerned with their data and are holding developers accountable for the non-responsive condition of their Switch.

There is nothing that could be done to rectify or discard the Nintendo Switch Error Code 2124-5210. The only thing is to wait and watch. Users should try again later if the Error is resolved. Nintendo would shortly fix the glitches and would, expectedly, inform its users about the same.

The company could be contacted through its website. But, as said earlier, the company must have taken cognizance of the issue and have been working to rectify it. To know more, see Error Code: 2124-5210 – Nintendo Support.

Nintendo Switch has suddenly failed to connect to the internet due to an error. The users are complaining extensively about it but have yet to get a solution. The Nintendo Switch Error Code 2124-5210 manifests some malfunctioning on Nintendo’s part. There is nothing that the users can do to resolve it, just can wait and watch. Have you enjoyed this article? If yes, we would like to hear your views in the comment section.