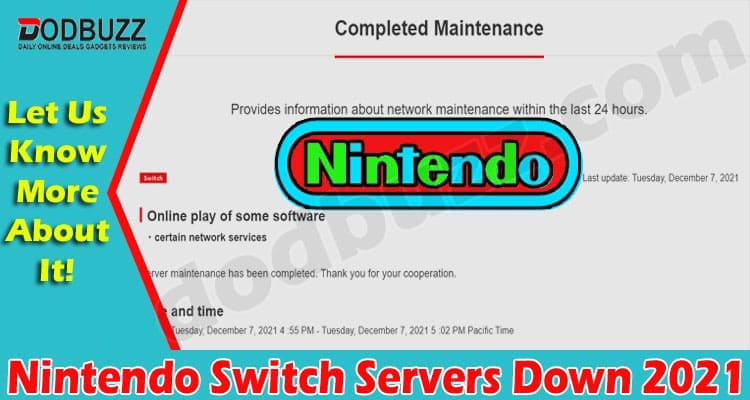 The guide shares details about the Nintendo Switch Servers Down issue to update worldwide players.

The Online Service for Nintendo Switch was down yesterday. It was experiencing connection outages, preventing many players in the United States from online plays and accessing the eShop to make in-game purchases.

After the outage, the company decided to update the worldwide players via their Twitter and official support pages. After several hours of notification, the company again published an apology notice for the continued inability to use the services o Switch because Nintendo Switch Servers Down.

However, the issue has been resolved, and the services are up and running normally.

When Was the Nintendo Server Down?

According to the network maintenance page and customer support on Twitter, the Nintendo Switch Server was down on 8th December 2021 at 01:00 GMT. The company updated about the outage on their Twitter page and urged the users to have patience until it resolved.

The company issued the notice to update the players that Switch was experiencing connection outages, preventing the players from making any in-game purchases and playing games online.

The company issued a notice on Twitter on 8th Dec 2021 at 5:30 GMT to confirm that the connection outages have been resolved.

Nintendo Switch Servers Down – What are the Underlying Causes?

Nintendo was not alone suffering from the connection outrage as it also affected many other companies. After evaluating, we found that the outage was caused due to issue in the Amazon Web Services or AWS that took place in the Amazon Cloud Directory in North Virginia, United States.

AWS is the famous computing platform by the eCommerce service provider that offers various services related to IT infrastructure. The online services of Nintendo Switch are offered via AWS to make the services more flexible and scalable to cater to the higher demands of the players.

The issue in the AWS started in the morning of 7th Dec, and hence it caused the Nintendo Switch Servers Down. The company’s previous notification about the outage also confirms that the server was down due to AWS issues.

Is Nintendo Switch Server Up Now?

Yes, presently, the online services on Nintendo Switch are up and running normally. The official Twitter page of Nintendo also confirmed at 5.30 GMT on 8th December that the server issue has been resolved, and players can now enjoy playing and making in-game purchases.

The Network Status Page of Nintendo also confirmed that all servers are normally operating and there are no server-related issues. So, you can try using the services now, and you won’t face any Nintendo Switch Servers Down.

This issue has been finally resolved, and players can enjoy gaming.

Nintendo Switch is an online service and gaming console with millions of fans worldwide. However, many users were recently prevented from playing games and using the eShop to purchase online due to server down issues. It was caused due to an outage in the AWS server. But, finally, it was resolved, and so was the game server.

Did you encounter the same Nintendo Switch Servers Down problems? Would you mind sharing in the comment section what your opinion is?