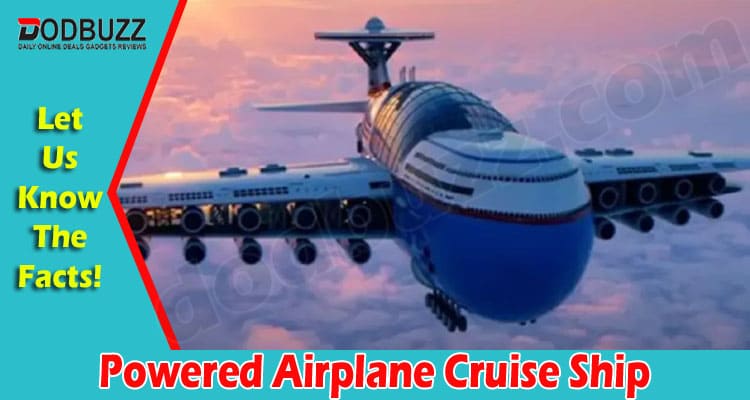 The article below helps you learn about the Powered Airplane Cruise Ship and all the related features.

How crazy could it be to see technology at a different pace and height? Do you think about future things that have been showcased in Sci-fi movies and dramas? Something has been trending in the United States.

Hashem Al- Ghaili is a renowned Sci-fi video creator, molecular biotechnologist, and science communicator. His videos are a piece of marvel. And recently, he released a video of a Powered Airplane Cruise Ship. So let’s see what this is!

As technology is funny and interesting and people are now open to new things, this man is releasing marvelous videos that are related and potentially seem to happen in the future. He has released many videos such as the future is now, in science we trust, pale dot, and so on.

Recently, he released a video of an airplane cruise that is believed to be functional 24/7 in the sky and can take 5000 passengers onboard on this Nuclear Powered Airplane Cruise Ship. This video is getting viral, and people are giving mixed reactions to it. Some are happy to see this possibility, and others are trolling and asking to shut these thoughts down as it seems impossible.

The structural view of this engine seems like a powerful jet with numerous engines on it. However, this idea has a twist, and it seems unique. This Airplane cruise ship will be powered by Nuclear energy. Viewers are giving positive and negative comments about nuclear energy as it has drastic energy that can build and destroy this world.

This video of an Airplane cruise ship (nuclear-powered) has given a new idea about the contemporary luxury lifestyle as we have seen many lavish ships and cruises sinking in the ocean with every possible amenity in it with the possible adventurous options. This airplane will do the same for people but in the skies.

Due to the power supply from a nuclear source, this airplane can fly in the skies forever. It will hardly land for any reason and can take any weather calamity on its body. Hence, this airplane has been nicknamed the flying titanic as well.

This ship is an imaginary Sci-fi model that will be powered by nuclear energy and will be self-ridden. It will be operated with the help of 20 nuclear-powered engines that will be more than any horsepower. Also, this airplane cruise will have the facility of giving passengers a 360-degree view. Hashem Al- Ghaili trolled netizens by saying that this aircraft is needless for any pilot.

This aircraft will have a shopping mall, wedding halls, bars, entertainment decks, cinemas, a swimming pool, sports centers, and meeting halls. There will be a small world hanging near the clouds.

Science is doing wonders and will continue to do so shortly. Some netizens trolled Powered Airplane Cruise Ship by saying it would be a nuclear bomb as nuclear energy is too sensitive to handle. However, the future will hold the answers to the positives and negatives.

Also, people are happy to see something so bizarre and huge that it will mark their lives with a unique experience. What do you think about this aircraft? Please comment below.