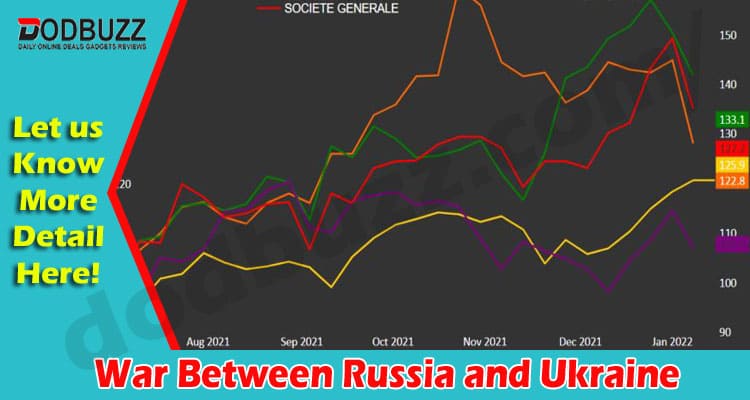 To be clear, we are not geopolitical experts. So we won’t get into the repercussions of a full-fledged war between Russia and Ukraine. Instead, we’ll stick with the financial standpoint, as we usually do.

Upon the fall of the Soviet Union in 1991, East European nations such as Estonia, Poland, and the Czech Republic departed from Russia’s zone of control and entered NATO. NATO is a military coalition comprising numerous European and North American nations. Given that “an armed attack on one or more of the members is considered to entail an armed attack on the territory of any of the members in Europe or North America,” the collaboration is exceedingly mighty.

In consequence, everyone retaliates.

As NATO’s dominance grew over East Europe, Russia saw itself in a dangerous situation. “You promised us in the 1990s that [NATO] would not move an inch to the East. You shamelessly cheated us.” – said Vladimir Putin.

Simply put, after standing up with this “incitement” for quite a while now, Putin now demands NATO to step down — to remove the weaponry and defense systems deployed in East European nations, as well as to block potential expansions. Most significantly, he opposes NATO’s acceptance of Ukraine, a country that neighbors Russia. Meanwhile, NATO refuses to give in to these demands because it believes that every sovereign nation, including Ukraine, should have the authority to pick its own course.

And, there was a deadlock. A deadlock that government elites strove to overcome.

But, regrettably, negotiations were ineffective. Diplomatic remedies were ineffective. Tensions rose further as Russian President Vladimir Putin escalated his threats towards Ukraine. At one juncture, he even challenged its independence, claiming that Ukraine was formed by Russia. Worst of all? He has also acknowledged the independence of Donetsk and Luhansk, two Ukrainian cities ruled in part by Russian-backed rebels and in part by the Ukrainian government.

According to political analysts, Putin may have laid the ground for a full-scale invasion of Eastern Ukraine. He may even choose to occupy the entire nation, but given the financial burden associated, that seems unlikely – at least for the time being.

So there you have it — the power structure.

While Western Leaders have so far denounced Putin’s conduct, they are unwilling to commit their own soldiers to fight by Ukraine’s side. Rather, they have pledged to consider sanctions. Sanctions, that will almost certainly cripple Russia’s economic system.

But, before we get there, let’s dive deeper into the battle. War comes at a heavy price. Today, Russia will not just pay for commodities and activities. They will have to do so indefinitely.

Now, Russia will have to comply with the sanctions as well. Consider sanctions to be financial constraints placed on Russia and entities functioning out of Russia. For example, the European Union and the United States are expected to place severe curbs on Russia’s cash flow from European investors. In absence of external financing, sustaining a long-term military war may be incredibly difficult. The United States will implement similar penalties and bar prominent Russian businessmen from entering the country. They’ll confiscate their properties and attack Russian companies, making it difficult for them to trade globally.

And here we are.

By now, it should be apparent that this situation is about more than just geopolitics. It all comes down to economics, money, and common financial interests. However, finance, like most things, is a temporal endeavor. You can’t just ignore the carnage and suffering that would follow if Russia decides to keep invading Ukraine and oppressing its people. People who, by the way, have no part in all of this. Ukraine is not yet a NATO member. And, according to Russia’s persistent claims, they have not been the perpetrators. They’ve displayed restraint.

With such war-like situations prevailing around us, do you often find yourself asking “what is term/health insurance” and wondering how you can know if you’re buying the right plan? And with all that, it requires for coverage, who could blame you for being confused about it all. Ditto allows you to compare policy, customer reviews, and positions in the industry.