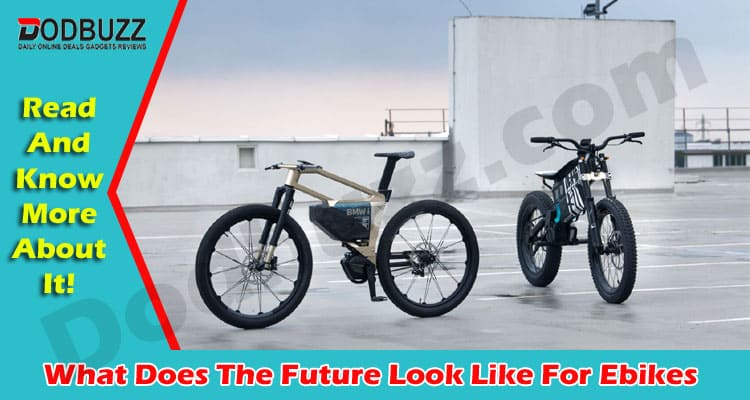 What Does The Future Look Like For Ebikes: Electric bikes have grown in popularity across countries of the world. In fact, the popularity of ebikes is gradually surpassing that of regular bicycles in almost every country. Electric bikes have now become widely attractive as a great way to enjoy an environmentally friendly alternative to driving. They are now used, not just for transportation and movement, but also to keep fit and relax during leisure.

Over the years, electric bikes have recorded massive progress, constant developments and continued preference and usage in so many parts of the world. For example, KBO E-Bike hit a new record in its electric bike Black Friday sale.This is due to so many positive reasons but one core reason is that when compared to cars and motorcycles, they are inexpensive, environment friendly, and remarkably simple to maintain. They are also very easy to pedal as there is a motor assisting you and helping you regulate your speed as you pedal. In comparison to regular bikes, electric bikes are more comfortable to ride and are easier to maintain and they can be ridden for several years without any major problems.

Every thing in life is bound to change, to grow, develop or become better over time and this phenomenon can also be applied to electric bikes. The future of electric bikes look very colorful and positive. Everything keeps getting better and easier for cyclists to handle and there is a lot of hope in the ebike industry. This positivity is coming from all corners of the world, from developers to ebike owners and supporters.

Electric bike future in our world is becoming more certain than not. This is because ebikes have become widely accepted in almost every nook and cranny of the society. They are widely recognised and are preferred by both senior riders and young cyclists as they serve different purposes for different age groups.

Many people are abandoning their cars and they are accepting ebikes as a perfect alternative. This shift in means of transportation, from car to ebike, is seen by some as an important measure to tackle climate change. The primary reason for this is that ebikes are smaller and produce far lower carbon emissions than motorcycles and electric cars. They also have lower maintenance expenses than vehicles.

Electric bikes have become stronger and now come in different frames, shapes and models to suit varying purposes. Electric bike’s future has become something to anticipate all over the world because with every change in climate, new electric bikes come up to suit the weather. There are a lot of electric bikes that allow you ride without fear in rainy season or even in hot, tropical seasons. Electric bikes have stood the test of time and are not likely to go out of the market in years to come.

With every passing day, electric bike future seems to get  better and progress is recorded in little but consistent and continuous ways every year. Research has proven that there would be massive increase in the usage of electric bikes over the next five years. It is expected that the ebike market will increase by 11.86 percent per year and this gives a total estimated growth rate of more than 75 percent in five years. This statistics only means that the number of ebikes on our streets and trails will double or probably triple as the years go by.

It is important to note that despite the general acceptance and use of ebikes in many areas of the world, there are still some states that place strict regulations on the use of ebikes while a few others totally ban the use of ebikes in their vicinity. However, in recent times, many states, cities, and towns are reconsidering their regulations and limits when it comes to letting ebikes on the route in their area, removing certain restrictions and replacing them with a more moderated reaction. With these new developments, there is no doubt that electric bike future is going to bring us more pleasure than discomfort.

The price of electric bikes have become more affordable than it used to be. There are new brands of e bikes coming up and this means more competition for brands in the electric bike industry. As technological advances gain popularity, the supply chain expands and prices fall. That means that you can get a high quality ebike at a truly affordable price. Electric bike brands will lower their prices to suit the budget of their customers and make their bikes more affordable than that of their competitors. This, in turn implies that the consumers will benefit from the decrease in price of electric bikes. An example of a really affordable e-bike is the Stealth Urban Electric Bike KBO Hurricane that costs $1,099 and even allows for monthly payment when you buy it on PayPal credit.

Electric bike future also depends strongly on its availability to the populace. In this aspect, electric bike brands are progressing rapidly as electric bikes can be found in almost any certified bike shop all over the world. It is available to laymen everywhere and at ridiculously cheap rates.

The Future of The Electric Bike

It is needless to say that electric bikes have come to stay and they are going to stay at the top of the market for a long period of time. The electric bike future in our world is certain and distinct. Consumer demands continue to rise everyday as ebikes become more common and popular. Overall, ebikes are still modified bicycles, and it takes time for this older device to fully adapt to its new, more powerful purpose but electric bike brands will continue to proffer solutions to every issue that comes up. They will keep on making specific adjustments to ebikes to help them serve man more and help people move faster, comfortably and freely for a long time. Ebikes will be found at every part of the world and at very affordable rates. There would also be:

Variety, they say, is the spice of life. To spice up your experience while riding ebikes, new varieties that have been worked on thoroughly will be brought out for people to use. As the trend and use of ebikes grows, so will the demand for a wide array of products. There would be a lot more frames and sizes of electric bike with different functions and to serve different purposes. More variety of electric bikes for senior riders to comfortably cycle with and even different types of ebikes for young and active cyclists.

Electric bike future will come with lots of positivity, an example is being able to ride long distances with small batteries. Large batteries are the reason for a significant portion of the additional weight that a bike has. It is expected that technological development would play a significant role in reducing the weight of ebikes while also increasing battery life. As technology advances, batteries will become smaller and last longer. The batteries of electric bikes would become really light weighted and small and cyclists all over the world would be able go farther and with less weight.

As technological innovations keep coming up, electric bike future will bring us electric bikes that much more lighter than they are now. Varying bike frames that will allow for the reduced weight of ebikes will come up and takeover the present electric bikes. It is possible that electric bikes never become as light as regular bikes but they will get as lightweighted as they can possibly be. And this reduction in weight will also take place in their different components like frames, batteries, motors and even wheels.

Electric bikes will get lighter and cyclists would prefer lighter electric bikes that can carry heavier loads. The electric bike future would make it possible that while ebikes become light weight, they will still retain all of their features and functions.

To help control waste and cut the level of toxic waste that each of us produce while riding electric bikes, it will be possible to recycle e bike batteries. This is not a new phenomenon as the batteries of some other electrical appliances, like laptops, are already being recycled in various parts of the world. Recycling of electric bike batteries will really help to keep our environment safe from toxic waste.

In conclusion, the future of electric bikes gets more positive, and everyday, we move a step closer to actualizing these innovations. We can see that electric bikes have come to stay. Ebikes serve a wide variety of purposes like making transport easier, serving as another leisure or work out activity and helping the environment by not emitting too much harmful gases.

All indications clearly point to electric bikes having a considerably larger role in society’s future than many of us can currently conceive. But, as with a lot of technological devices, we can not say this with utmost certainty until it happens. It could also not come to fulfilment, and electric bikes will be thrown out the window, becoming a thing of the past, however, the chance that this will happen is very low when compared to all the positivity that electric bike future will bring.