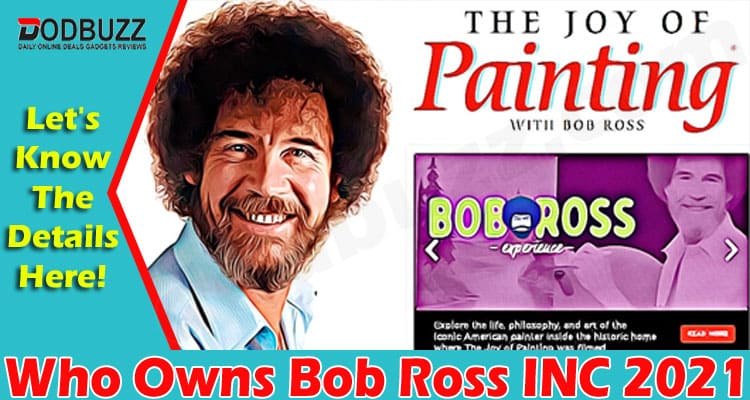 Read about the legend in the world of art Bob Ross and find out Who Owns Bob Ross INC now.

Some people are a living personification of sunshine and rainbows. Their life may be filled with struggles and problems, but they don’t fail to make other people happy and feel wholesome. One such person is the legendary Bob Ross.

It is a name that could fill many people with happy nostalgia. He is one of the best things that the United States gave the world via television platform. He has left a legacy behind him in the form of his shows and later a corporation.

However, much more is happening behind the scenes, and much of it is related to Who Owns Bob Ross INC.  So, let’s unearth the truth here.

Who is Bob Ross?

Unless you are off the social media platforms, you will be very familiar with a flamboyant-haired, peaceful paintbrush-yielding man who is seen teaching how to paint. Bob Ross, whose actual name was Robert Norman Ross, was born on 29 October 1942 in Florida.

He was the host of the famous show The Joy of Painting. The show garnered so much attention because of Ross’s soothing persona and instructions on how to paint. The ran till 1983 to 1994 and was a huge success among the people of the United States and later the whole world.

After 25 years of his death Bob Ross is still ever-present, be it the social media platforms, memes, or even in shows and skits. He has all sorts of merchandise ranging from bobbleheads to coffee mugs etc. All thanks to the Corporation founded on the name that uses him years after his death to reap the benefits.

According to the reports, the corporation is owned by Annette and Walt Kowalski. The Kowalskis started their association with Bob Ross when they went to take art classes from the famous artist after a family tragedy. The interaction led Kowalskis to make a show on the PBS network, and the profits from the show were equally divided among the Kowalskis, Bob, and his wife, Jane.

However, equations changed, and Who Owns Bob Ross INC became prominent as Bob was sidelined from the company he started. Years after Bob’s struggle to preserve the rights to the company belongs to Joan Kowalski, daughter of Annette and Walt Kowalski, pushing aside Bob’s family out of the company.

The Latest News Associated with the INC

Currently, the company is ranking up the news again. This time the company is determined to sue the makers of the Netflix documentary Bob Ross: Happy Accidents, Betrayal & Greed. According to the company, the show’s portrayal of the incidents about the company was inaccurate. The people Who Owns Bob Ross INC said that the makers did call the company regarding the information; however, their approach was not transparent.

As a concluding thought, we would say that the company in question has been a topic of strain for many years. The sad reality is that the company has been profiting from the great artist and has not shared a penny with his descendants, according to reports. It is sad for many fans to see how their beloved icon has been exploited and marketed.

Let’s remember the ” Happy Little Accidents” that Bob Ross introduced us to by watching this video here.

What do you think about the person Who Owns Bob Ross INC? Let us know in the comment section below.