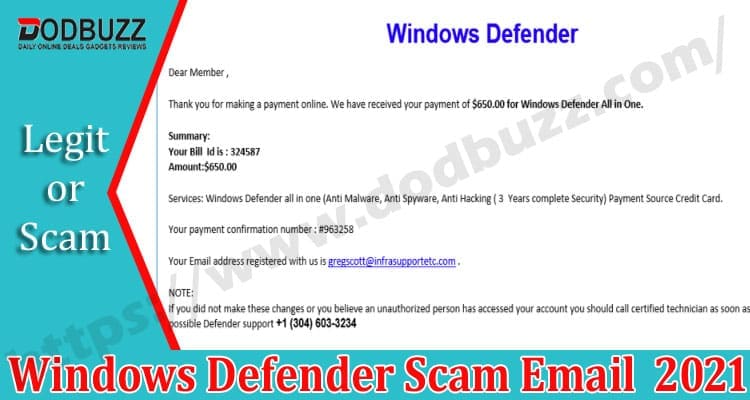 Every time the fraudsters make a new round stating they have charged the customers with $150, $199, or $299, it is billed annually. If customers want the refund, they have to miscall or call a number provided in the email.

Windows Defender Scam is the new email scam by fraudsters to target Windows users and steal their personal information and card details. The scammers send fake emails to Windows 10 users worldwide asking them to renew their Windows Defender Suite for $150, $199, or $299, which is billed annually.

Many users are receiving such fake emails and messages with the link to renew their Windows Defender. You have to understand that Windows never send an email to renew the security suite, which comes built-in for free.

What Does the Windows Defender Scam Email Appear?

There is a curiosity amongst the Windows users to know how the email looks so that if they receive such emails, they can delete it without a second thought.

How to Prevent such Fake Emails?

If you receive a Windows Defender Scam Email, then you must be equipped to avoid such emails.

Windows Defender Email Scam has been in existence for many years and targeting millions of Windows users worldwide. However, you can avoid such fake emails and scams with a few smart tricks mentioned above.

Have you ever received the Windows Defender Scam Email? What steps have you taken to avoid it? Please share it in the comment section below.