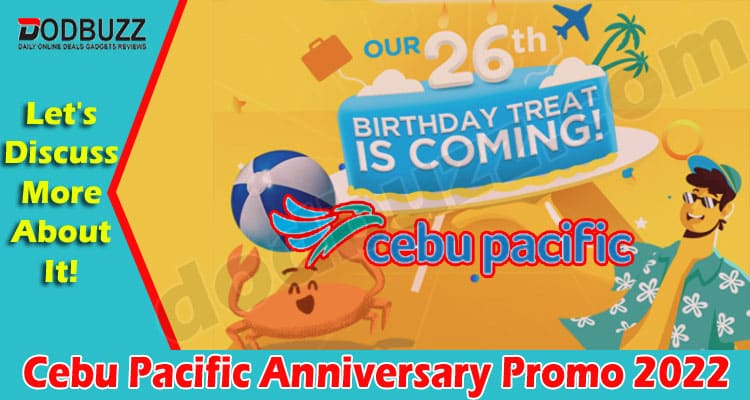 Are you going to receive the benefits from Cebu Pacific Anniversary Promo, or it’s simply a scam? Know the complete details through this post.

Are you willing to travel to national or international destinations? So, you must be searching for tickets as low fare as possible. Have you heard of a Philippines-based Cebu Pacific air company? Has anyone scheduled their travel through this airline?

Do you know when Cebu celebrates its anniversary? Are you waiting for the company to release some offer to get a discount on booking? If so, we are here to inform you why you should not click non-official random offers from the airlines. Let’s read Cebu Pacific Anniversary Promo to know more!

What is the latest news regarding Cebu Pacific Airlines?

Cebu Pacific Air has issued an advisory guide on its official Twitter and Facebook page. Taking the matter of scams seriously, the company shared the post on August 3 2022, to make people aware.

In the post, they mentioned being aware of the scam messages, links, campaigns, and contests that claim to provide “promos” and promise cash as gifts or rewards. They encourage people to visit their official page for sales, promos, or offers.

When is the Cebu Pacific Anniversary Date?

Cebu is the widest air network, serving the people of Asia and the UAE. Cebu Pacific first landed in the aviation industry in March 1996 and thus celebrated its anniversary every year on March 8.

However, the airline’s establishment date is August 26 1988. Seeing this date nearby, scammers get a chance to fool people around them in the name of the company’s anniversary.

The Cebu Pacific Air has urged people to stay vigilant while sharing personal information with third-party or non-official websites. As of now, there is no Cebu Pacific Anniversary Gift and promo available, especially with the anniversary theme.

Cebu Pacific (CEB) has been in the business since March 1996 and is known for its low-cost, great-value strategy. The CEB has carried over more than 180 million passengers since its establishment.

The company, however, has 36 domestic destinations and is the most comprehensive network across the Philippines. The hubs in Cebu and Manila and focus cities are Zamboanga, Clark, Davao, Iloilo, Kalibo, and Oro.

Many users in recent days have complained that scammers trick them. Some of them have shared screenshots of the Cebu Pacific Anniversary Promo claiming to give benefits like cash in return while clicking on the link. However, the company strictly says to follow their official website, which is cebupacificair.com, for checking ongoing promos.

Is there any offer on booking?

On the official Twitter and Facebook page, there is an offer to “Book early for 2023 for more savings.” The offer is valid till August 7 2022, and you can book for a travel period from February 1 2023, to April 30 2023. You must visit the official website to know more and claim the ongoing offer.

Cebu Pacific Anniversary Promo, gifts, and rewards are circulating on the third-party website, which is a complete scam. The company has advised people to beware of such links or messages through the post on its official social media page. To know every detail of Cebu Pacific Air, you can visit here.

Are you also tricked by scammers by any means? If so, tell your scam story in the comment section below.