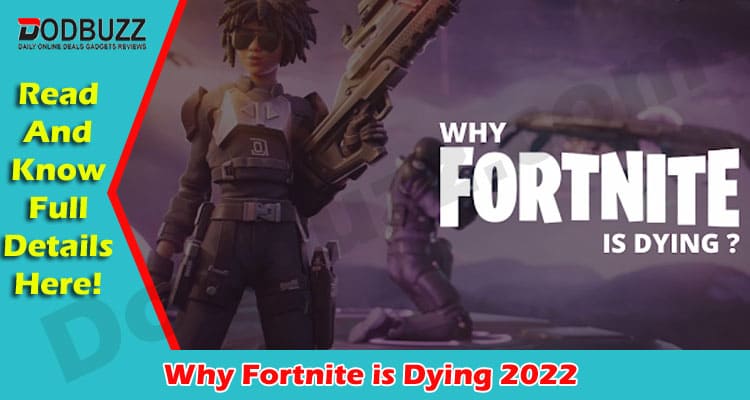 Why Fortnite is Dying: Fortnite redefined the Battle Royale genre of games when it was released way back in 2017. Since May 2020, the game has a million of fans and it seems like a massive hit still going strong among gamers all over the world. According to the popular gaming site, MostValuedNoob, things seem to be a bit different when you take a closer look.

Even though there’s no denying that Fortnite has been a massive success, it must be understood that it is past its prime now. In other words, even though it has widespread popularity and a sizeable number of people still search for the best laptops for Fortnite, things are going downswing with other titles in the same genre gaining more prominence along with a larger chunk of the market share.

As of August 2018, Epic Games revealed that it had tons of fan following, since then no data has been released. This itself tends to raise doubts and makes one think that things are not as good as they seem for this game.

Available stats reveal spikes and troughs occurring around updates, the launch of new episodes, and events. This obviously makes you wonder if this gaming is actually surviving on the “special events or incidents” or on refreshing content.

Many a time, the popularity of a game tends to wane off and it is quite possible that something similar is happening to Fortnite. Even though it had a meteoric rise in popularity, sustaining this popularity is not something that’s very easy.

One of the most important things to keep in mind is that whenever a title becomes a massive fame, it brings a big burden for the developers to maintain the game’s standard to a good level over the career including updates and newer versions.

That the overexposure and popularity of Fortnite might have rubbed on to some of the other similar games could be another cause of worry for Epic Games.

This is one game that seems to have got a lot of media exposure too. It was quite debated that the game is inappropriate for children since it is compelling. The bad press, I guess, was one of the major reasons for many existing gamers to quit it as well as prospective players to have dropped the idea of starting playing it. According to an article, a user obsessed with the game has bathed herself while playing it. However, after seeing the situation, a lot of parents must have decided never to let their kids play this game

It’s worth noting that most parents are always concerned that their kids do not get addicted to such games. The resounding success and recognition of Fortnite and the exposure that it seems to have got is enough for parents to keep their children away from playing not just Fortnite but many other similar games that they suspect their kids might get hooked to.

As per the reports, the game seems to have been trying various methods to up its popularity quotient. Some of such efforts include a persistent overhaul of the weapon pool, changes in the map, spinning the game’s posture, etc.

Changes in weaponry seem to be the center point of discussion among fans anytime and every time a new defense materials is included or when an older one is buffed or dropped.

One of the biggest mistakes committed by Epic Games was avoiding the inclusion of mending notes for upgrades. What it meant was that the players were left to decipher the required changes on their own.

Another grave mistake was the inclusion of B.R.U.T.E. robots in the game’s 10th season. The problem was that these giants were extremely powerful and players stood nowhere in competition to them. They have increased energy levels, amazing mobility feature and efficient boosters. Thankfully, they were removed later on and this seems to have pleased even the most seasoned and successful players.

Fortnite is not the only game that is popular in its genre. New and more exciting games are trying to grab a bigger share of the market. Some of such titles that are now making headlines include Apex Legends, Call Of Duty: Warzone, etc. and I must say that they are steadily moving ahead with the aim of toppling Fortnite from its position of being the market leader.

Call of Duty has been a massive game-changer. It’s worth noting that it happens to be amongst the largest game series of the era and is known to be the favorite of millions of players worldwide. Thus, when it launched Warzone, the game was easily able to get a staggering 30 million gamers or players in the primary or first ten days itself.

Apex Legends is not far behind. As a matter of fact, simply eight months after its launch it is known to have amassed as many as seventy million players till Oct 2019. The latest figures are likely to be much higher, of course!

Both Call of Duty: Warzone and Apex Legends are known to introduce interesting landscapes and other important features on a regular basis to keep their players hooked.

It’s hardly surprising that one of the reasons for the decline in Fortnite’s popularity is the recognition of other titles in the same genre, as suggested by the evidence.

Even if you check out Google Trends, you will find out that Fortnite’s popularity seems to be shrinking as compared to that of Warzone which is new and fresh as compared to Fortnite which seems like an old game to many players now.